As it turns out, it’s a good thing that we are capable of being surprised by the Ol’ Pussy Grabber. Isn’t that the biggest fear of the Resistance? That the Ol’ Pussy Grabber will become normal that people will accept his incompetence and stupidity and arrogance as normal. And, that normality will sap the resolve of all but the most stalwart of the Resistance lulling us into complacence and acceptance while our wealth is transferred to the richest, our resources sold cheap, our sovereignty traded for personal gain, and our people sacrificed to corporations and special interests.

Daniel Kahneman had some ideas about how things become normal and the role of surprise. These ideas can help us resist the normalization of the mishigas and the looting of our country and destruction of the world.

Let us first consider how things become normal. A large part of our brain, the part whose function we are unaware of, is devoted to representing our personal world. It does so by using a complex associative network. We add stuff to this associative network by interpreting what our senses tell us. We interpret the stuff our sense tell us based on what we’ve experienced before. It all just gets dumped into this vat and boiled down into what we understand to be the world we live in. And, the world we live in is normal to us.

We construct this model through repetition. The more we are exposed to something, the more familiar it becomes, the normal it seems. It extends beyond the objects in the environment to include the events, so when two events co-occur frequently enough and close enough together, we associate them. In some ways, it is astonishingly simple yet results in something so complex. It is the associative pattern in this associative network that determines how you interpret the world.

In evolutionary terms, surprise is super important. The things that occur regularly and frequently are not dangerous or they woulda killed ya by now, don’t ya think? So, they are safe to ignore that is until they surprise ya or something else comes along to surprise ya.

Kahneman figgered there were two types of surprise. One type is a violation of something that we actively and consciously expect: a disruption of routine. Something doesn’t happen that we expect to happen. This is where the Ol’ Pussy Grabber starts to figure back into the equation. We actively and consciously expect our president to tell the truth or something that is close to it. So, when the Ol’ Pussy Grabber lies, we are surprised because it defies our expectation of what a president will do. When the Ol’ Pussy Grabber said he sent the powerful armada, it’s just the USS Carl Vinson aircraft carrier group, to the seas around the Korean peninsula, we believed him! Stupid us. We thought presidents would order the military to do something and they would do it, you know, commander-in-chief-style.

And certainly worldly militarily experienced men like McMasters and Mattis believed him. So, why didn’t it happen? Maybe it didn’t happen because the Ol’ Pussy Grabber jus’ told the reporter that he had done it but neglected to tell commanders what he wanted ’em to do. Is it possible that the Ol’ Pussy Grabber is just that stupid? Yes, yes he is.

We are actively and consciously expecting the Ol’ Pussy Grabber and his cabinet and administration to behave in a certain way, you know presidential.

Now, the second type of surprise is something that we passively expect the large number of events and items that we do not actively and consciously anticipate, but when they do occur, we’re not surprised and when they don’t, we may realize it. If we realize it didn’t happen, then, we’re surprised.

Now, here’s the tricky part. We quickly realize when something doesn’t fit our concept of normal. When something cement does not fit into the current context of activated ideas, to borrow one of Kahneman’s lines from Thinking, Fast and Slow. You saw he word cement immediately. It didn’t belong. And, we just as quickly try to make things fit into the pattern that we’ve established in our associative network. So, to borrow another example from Thinking, Fast and Slow, consider the following:

After spending the day exploring beautiful sights in the crowded streets of New York, Jane discovered that her wallet was missing.

Most people will assume that Jane’s wallet was stolen by a pickpocket. Not everyone, perhaps not even you. But many people will complete the story based on their prior knowledge of New York, tourists, and crowds. Being pickpocketed is something we expect to happen to someone naive like Jane when touring an unfamiliar dangerous city like New York. There is an intuition at work here born of our shared experience so that our associative networks overlap enough for similar ideas to be activated. Nice, hunh? We’re like one big happy family.

So, when the Ol’ Pussy Grabber says he sent the armada to Korea, we just assume that he actually issued the order. We assume that he knew how to order the military into action. It is what is so insidious about most of the Ol’ Pussy Grabber’s lies. It is what turns them into illusory explanation.  He is so abnormal and his behaviors are so abnormal that we cannot comprehend it. We assign normality to him. But, he is in no way normal.

Many people will not be able to resist the normalizing effect of the repeated exposure to his abnormal behavior. It works on our very humanness. It is imperative that the Resistance keep pointing out the lies, the irrationality, the absolute irresponsibility of it all. And, it is imperative that we keep demanding that all of the other elected officials not collude with the Ol’ Pussy Grabber by trying to convince people that he’s normal. We have to hold them accountable. We have to vote for those who will resist the madness. 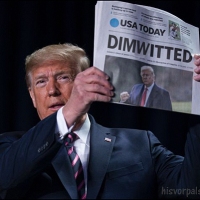